In 1956, after a year at KSEI in Pocatello,  Norman decided to look for bigger things. He drove up to the nearest large city, Spokane, during his vacation, and quite easily landed an announcers job at KHQ-AM/TV. Must have been good timing.

Norman took over the afternoon record show and he also pulled a board shift now and then in the TV announce booth. KHQ-AM was an "adult" station with many CBS Network commitments and they were competing with KREM, an independent station that played popular tunes all day. 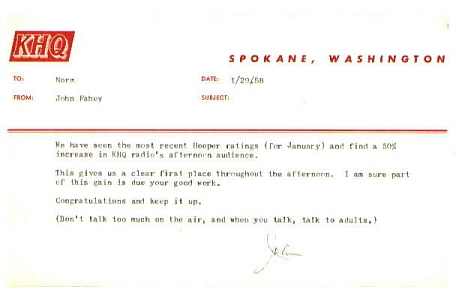 KHQ's studios and transmitters were located on Moran Prairie, which was located up a fairly steep grade from downtown Spokane. There were several routes up the cliff, but in the winter, there were times when it was almost impossible to get to work. It sometimes required several tries on different streets, until one was found that was sanded, or slightly less slippery. This resulted in a few late arrivals and fender benders.

Norman met Rosetta Dolajak while working at KHQ. They were married in 1958. Norman also attended Eastern Washington College of Education (now EWU) in Cheney, about 20 miles from Spokane. He enrolled quickly when he got a draft notice that made military service look imminent without a college deferment. While at EWCE, Norman interviewed his first celebrity, Dave Brubeck, who performed at the college.

The Davis family (Rosetta pregnant) left Spokane in the summer of 1959, determined to avoid another Spokane winter. They headed to San Francisco, a city Norman had visited as a teenager and had been very favorably impressed.