From 1976-1978, KSAN, in San Francisco, presented America's first, regularly scheduled Punk Rock radio show. The Outcastes was conceived by Norman Davis and Chris Knab, owner/manager of Aquarius Records on Castro Street. Knab was interested in the new music coming from England and, as someone always interested in new trends, Davis thought of a way to present it on the air.

He approached KSAN management and was given the okay to present two hours of this blood-curdling new music from 2-4 a.m. on Friday night (Saturday morning). Chris, who adapted the air name, "Cosmo Topper," suggested bringing in writer and punk fan, Howie Klein to co-host  the program.

The first show was broadcast in October 1976 and went on to make history (of sorts). For almost two years, The Outcastes presented some of the most outrageous guests and music ever heard on the radio.
Visitors included: The Sex Pistols (Steve and Paul who lived up to their PR), Devo, The Cramps, Roky Erickson, The Nuns, The Dead Boys, Iggy Pop, and numerous other late night misfits. 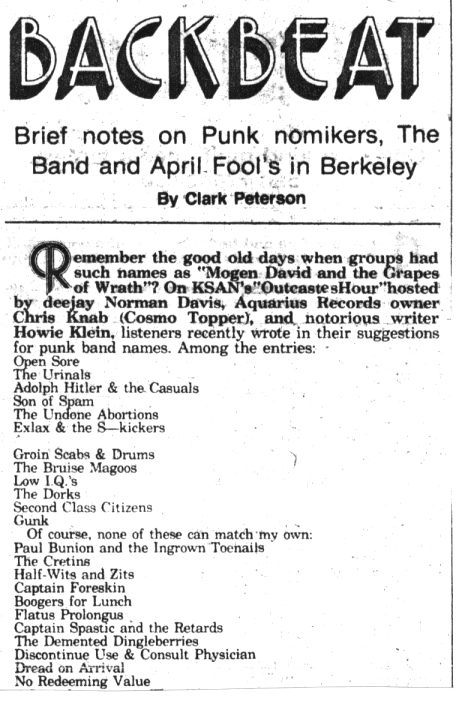 The Outcastes was wildly popular and attracted a huge following. The show changed names in June 1978, when Davis, refusing an edict to begin playing management pre-selected music on his show, was fired.
Davis' replacement on the all-night shift was Sean Donahue who gamely went on with Cosmo and Howie to continue the weekly punk show, now called "The Heretics."

Davis turned up at KSJO in San Jose a short time later, where he served as Special Promotions Director for a year, and continued hosting The Outcastes with Cosmo and occasionally Howie, on Sunday evenings for a few months until it was cancelled.